Latest
Home
Be Inspired
Drum on Content: Don’t Throw Your Viagra In the Bin

Don’t Throw Your Viagra In the Bin Because It Doesn’t Cure Angina: Why We Need to Embrace Creative AI

We bring you a monthly view of branded content from BCMA Members, Drum.

Data led creativity. For the creatives among you, even reading that phrase probably led to shudders. It leads to grey, dull images of online retailers that respond to you buying curtains by following you around the web for 90 days screaming “you like curtains? Here’s more curtains, buy more curtains!”.
While there are lots of examples of this kind of inadequate thinking, it has led us to create a binary opposition of science vs creativity. Data vs inspiration. The boring, tested and understood vs the exciting magic of the unknown.

The problem with this is that it ends up forcing us to build ideas with one hand tied behind our back. We’re limiting our ability for serendipitous discovery. Serendipity is the faculty of making happy and unexpected discoveries by accident. The modern creative has to have an understanding of data, algorithms and AI in order to facilitate that. Those that don’t are limiting their serendipity and as a result, their creativity.

Perhaps the best example of modern serendipity is UK-92480. A muscle relaxation drug designed (through rational drug design) to help lower blood pressure in angina patients. Sadly, after 8 years of development and millions of pounds spent, the project was well on its way to being canned. That was until, when looking through the feedback from the male volunteers in the study, one researcher noted that a number had reported “a change in erectile function” – UK-92480 became Viagra.

This isn’t a one off either. In a major study of blockbuster drugs, consultants from Bain found that the majority of ‘big finds’ – in the region of 70% – come from those pharma companies who specialise in making big finds. In essence they found that ‘you make your own luck’.

So if Pfizer can make their own luck, their own serendipity, how do we do the same?
At Drum, we looked further into the story of Viagra, alongside many of the great stories of scientific serendipity – from Penicillin to electromagnetic radiation, or from X-rays to the pacemaker to identify, and implemented the 3 key qualities that were required for successful serendipity.

The first is the ability to look beyond the immediate and into the periphery. They took on board different types and streams of information and understood what they were being told. When it comes to the human brain vs a computer, we come in a distant second. Consider Spotify’s Discover playlists or DoNotPay’s chatbot lawyer. A human DJ or lawyer will never be as efficient or as effective as those two. One generates hundreds of millions of plays a week and receives regular comments on Twitter that ‘no one knows me as well as my Discover playlist’, the other turned Good Will Hunting into a reality and wins thousands of cases on technicalities.

As a hunter-gather, it paid to notice a lion without having to be permanently watching for one. Those of us that didn’t have that skill didn’t tend to be around long enough to pass on their genes. However, we’ve built machines that can ingest more stimuli and process faster than our brains could ever dream. We’ve been beaten at the one thing we’ve always been great at – instinct. Or to put it another way, AI driven machines now have a greater capacity for serendipity than we do.

Going back to our Pfizer researchers, they were also able to be objective about what the data was indicating they should do next. You’ll notice they didn’t keep plugging away at making the drug a better treatment for angina – they changed course and killed off the ineffective track of work after 8 YEARS of R&D. To appreciate how truly amazing this is, look at the countless examples of how strong the sunk costs fallacy is on our brains!

Finally, the team involved knew of other studies that were going on, more specifically into the area of erectile function, and were able to recognise the significance of what they’d just discovered (when it was combined with findings from elsewhere). In short, they made the ‘creative’ connection between two seemingly unrelated things. Now, we know AI can be excellent at doing this in data heavy environments (PPC, social advertising, etc) but it’s making gains on us in more traditionally creatives spaces too. Just look at Scriptbook – a machine learning tool that can predict the box office takings and IMDB scores of films, just by reading the screenplay.

Data analysis, objectivity and developing connections. These are the 3 qualities that we need in order to become more serendipitous, to turn our own personal failing angina tablets into hypothetical blockbuster drugs. As shown above, they also happen to be 3 qualities that where the algorithmic world can provide huge support.

To read the trade press and hear speakers talk at industry events, you would assume that the only response to the accelerating advance of AI is to laugh at the idea that a machine could ever take on the wonderfully human, serendipitous creation of ideas. To remind ourselves (as the beast reaches the door) that we’re perfectly safe – it will never be able to come for us.

As a result, something terrible has happened. We’ve become accidental luddites. Belittling technology for fear it will replace us, avoiding it for fear of deeming it worthy. Every time you read the head “Is data killing creativity?” or “Will AI ever replace creatives?” the answer is always the same. No, we’re special. Algorithmic technology is always the bad guy.

Enough. There is a better way. Algorithms don’t have an innate desire to be curious (yet, a Berkeley group is working on it) – so they need you to understand what they should be looking at and then what to do with the results – especially in a creative space. The humans among us that can give the technology the right questions in the right language have the capacity for ground breaking creative ideas. Look at Renault’s brilliant Written By Zoe providing genuine moments of human emotion through a script effectively written by a computer and a car.

That brings us to another key point. When a computer spits out an answer, it needs the right person to understand it. Remember that they are unbiased and your brain is not. If the results look odd – ask why. Don’t assume the data is wrong or irrelevant – dig into it, use your human creativity to find out why it looks like it does.

I’m sure you’ve all been in rooms where someone has said “Well the computer said X, but that doesn’t make sense so we’re doing Y”. This needs to end. If your gut instinct is being questioned by data, your gut is wrong, not the data. The number of biases in our brains and the huge impact they have on our decision making simply don’t exist for AI. Cosabella’s shift from human-run social and search campaigns to a strategy that is planned and bought by AI has shown game-changing results – 155% increasing in ROAS QoQ. Albert, the AI looks at all the data available and suggests new campaigns with insights that sometimes didn’t make sense to the humans managing it, but they let them go live anyway. The AI was identifying connections between data sets that the humans didn’t, or couldn’t see. Don’t throw your Viagra in the bin because it doesn’t cure angina.

When it comes to serendipity, the connections that technology can provide are opportunities, not threats. They’re evidence-based inspiration. What amazing ideas can come from having a computer else do the mental leg work to find these incredible connections?

As far as Drum’s concerned, the future of the industry is an exciting, creative place where we can come up with ideas that expand our horizons through embracing technology.

Today that means algorithmically generated inspiration and stimulus as well as integration in the OMG UK agile data platform for both insights and ideas. So as we take our early steps into this world with both excitement and trepidation, perhaps the marriage of humans and machines is closer than we think. 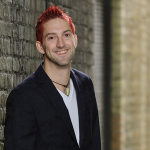 Equally at home in an excel sheet of emotional analytics data and a creative ideation session, Ben spends his days focusing on the psychological impact of Drum’s content and the environments in which it sits. In short? he sits somewhere between creative and strategist. He didn’t exactly take the traditional path to strategy. Over the last decade and a bit, he’s covered everything from paid search to PR, video production to emotional analytics and global content strategies to micro influencers. Currently working as Drum’s Content Experience Director, he’s previously worked in Zenith Optimedia’s worldwide division, run Weber Shandwick’s Australian digital offering as well as setting up CMG’s Australian digital studio.

Part of Omnicom Media Group, Drum are a content business that helps ambitious brands both co-create and co-opt popular culture. They do this through five product specialisms:
Strategy
Formats
Partnerships
Social
Talent