We are delighted to be able to bring LEGO Batman’s hilarity to life in such a contextually perfect and high-profile platform as Channel 4’s peak time schedule. Whilst this partnership might not land him a full-time job as a continuity announcer anytime soon, I’m sure it will make a big impact in the run-up to the launch of the movie.” Deputy Marketing Director, Warner Bros. UK, Martin Gough

In a UK broadcast first, the idea was to have Lego Batman take over the continuity announcements (in which an announcer reads out the up-coming TV schedule) on the UK’s Channel 4 for the entire weekend before the cinema release of The Lego Batman Movie. In a series of short, hilarious, animated films that aired in ad breaks around the biggest shows, Lego Batman commented on what the UK public were watching from his very own yellow brick recording booth. We worked with Warner Bros. animation and star of the film Will Arnett to bring the films to life and ensure that they were of the same world as the film that people had come to know from The Lego Movie and the trailers for The Lego Batman Movie. We wrote a multitude of scripts – some of which specifically referenced top programmes such as Come Dine with Me, The Jump and Hollyoaks – and sequenced them across peak ad-breaks during the weekend before the film’s release. Through smart placements in big, relevant shows we were able to make it seem as though Batman had really taken over these announcements and was commenting in real time.

Channel 4 also supported the activity across Twitter and Facebook with posts from Lego Batman himself, further cementing the idea that he had barged into the fabric of their channel and was calling the shots.

Our brief was to herald the film as more than just an animation for kids and celebrate Lego Batman as a hero and icon in his own right with a piece of surprising, disruptive content. We had to appeal to a broad audience ranging from families with kids to tech savvy teenagers, and up to 16-34 blockbuster buffs. We would know the content was a success if the film took huge numbers in its opening weekend, tracked strong awareness leading up to the release and drove social media buzz and positive sentiment for the character. 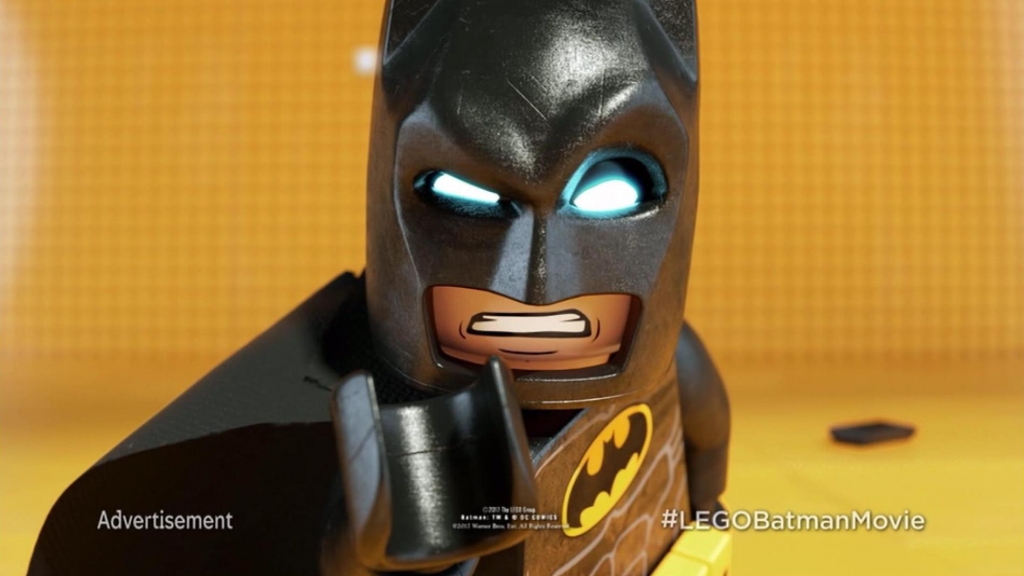 Our strategy was built upon the core pillar, ‘Lego Batman Barges In’, which summed up the disruptive, bold and hilariously self-assured nature of the character. The content had to feel as though it was driven by Lego Batman’s need to be the centre of attention, barging his way into popular culture and UK media. The Lego Movie surprised audiences in 2014 as the standout comedy of the year. Our approach was to use disruptive, innovative content to let people know that The Lego Batman Movie was going to be even funnier, leveraging a media partnership and multiple cultural touchpoints to speak to the broadest audience possible. The key to our approach was to create a seamless integration between the world of the film and the world of the media publisher with a bold media first.

Our approach began with Lego Batman’s character. He’s brash, big-for-his-boots and incredibly self-assured, and we needed an idea that encapsulated this through content. We wanted to work with a TV station that would allow us to play with the fabric of their channel in a way that had never been done before, and Channel 4 were a perfect fit. We negotiated early access to their schedules and wrote scripts that referenced specific shows. The scripts were brought to life by Warner Bro’s animators in Burbank and the star of the movie Will Arnett brought the character to life once again, this time on a brand new platform.

Our eighteen hilarious films aired across the weekend before the release of the film in peak time and the response was overwhelmingly positive. Channel 4 even supported the content on Twitter with Lego Batman taking over the keyboard, further cementing the fact that he had truly infiltrated the channel.

Continuity Bat was seen by 40% of the population in just four days, and one in six viewers booked a ticket to see the film as a result, delivering an ROI of more than seventeen pounds for every pound warner Bros. spent.

The campaign – which was supported by Channel 4 on Twitter – generated positive buzz on social media with high engagement levels across the weekend. Research showed that 81% of people who saw the films thought that The Lego Batman Movie was going to be funny, and 78% thought that it would be an entertaining film for the whole family, not just kids. Over half of all viewers recalled Lego Batman’s announcements, with parents scoring the highest. The research audience was significantly more interested in seeing the movie having watched the announcements, and 80% of them went on to perform an action, from booking tickets to watching the trailer.

The film launched the following weekend in the number one spot at the box office, a position it held for three weeks.